COVID effect: Ohio suffers record death toll in December and all of 2020 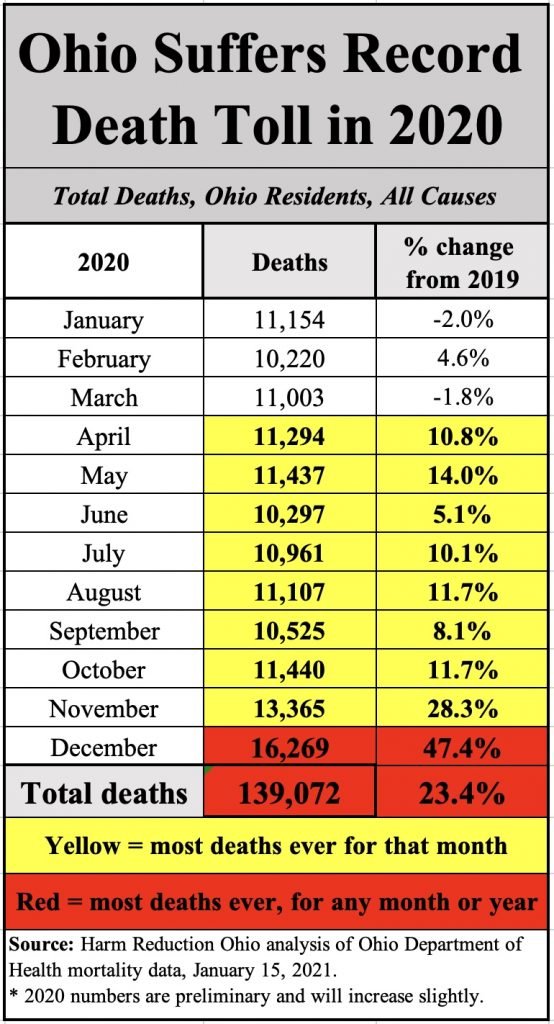 Before 2020, Ohio had never suffered more than 13,000 deaths in a single month. In November, we exceed 13,000 for the first time. In December, we lost more than 16,000 residents to deaths from all causes.
The horrific cost of human life from the COVID-19 pandemic is becoming clear. It’s as bad as expected, maybe even worse.
Ohio has set a monthly record for deaths for nine consecutive months, since April 2020. But the last two months of the year have taken the state to a new level of death far beyond what has ever been experienced in Ohio before.
Total deaths from all causes now exceed 16,000 for December 2020 and more deaths are still being entered into the state’s mortality data. Deaths reported so far already put December 47.4% ahead of the deaths that occurred in December 2019.
For the year, Ohio’s death toll is likely to top 140,000, far more than the 112,970 resident deaths in 2019. This size of this increase is unprecedented. In modern history, deaths have never increased (or decreased) by more than 3.4% from one year to the next.
So far, the Ohio Department of Health attributes just under 10,000 deaths directly to COVID-19. That number is likely to rise as causes of deaths are detailed. The mortality data first reports that a death occurred. (See numbers in the chart.) Then details — primary causes of death, secondary causes of death, education levels, etc. are added over the following six months to a year.
We know for a fact that about 27,000 more Ohio residents died in Ohio than in 2019 or in any previous year. Some of these deaths may be indirectly related to COVID-19 or our response to it.
For example, overdose deaths increased about 750 in 2020, an increase that might have been related to COVID-19. Also, some residents may have delayed medical care. However, suicides declined in 2020. In other words, a deep and accurate understanding of Ohio’s deadliest year will take time to untangle in detail.
What we do know is this: Ohio suffered a level of death in 2020 that was unprecedented. There was nothing like it — or even close — in our state’s history. Has this horrific volume of death continued in 2021? We don’t know for sure, but it seems likely. The state has already recorded more than 3,300 deaths in January, far more than you’d expect to be already recorded in first 14 days of a month.