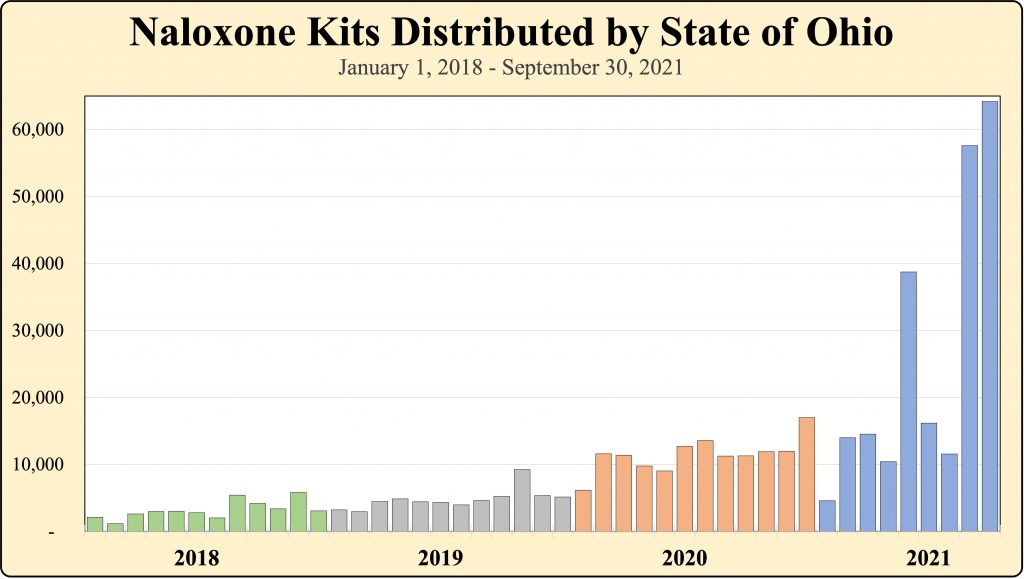 The state of Ohio deserves a standing ovation for a massive effort to expand access to naloxone, the overdose-reversing drug, in the last five months. The chart tells the story of the state’s large and heroic effort. 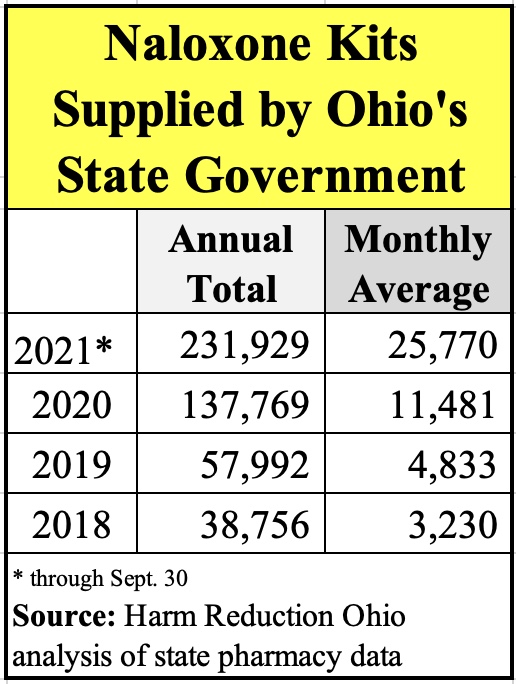 The administration of Gov. Mike DeWine deserves credit for organizing this massive overdose reduction effort in a short time (by government standards) and during a pandemic. Ohio suffered a record 5,017 overdose deaths in 2020 and is on track to match that sad number in 2021. We won’t know how much an effect the naloxone supply increase had on overdose deaths until next year.

The state’s latest naloxone distribution effort — timed to Overdose Awareness Day (Aug. 31) and Recovery Month (September) — was by far its most creative and important. For the first time, the state expanded who could get Narcan. It opened the door for community groups (from churches to harm reduction activists)to get naloxone.  Previously, nearly all naloxone was funneled through institutional channels: health departments, mental health boards and medical providers. (Harm Reduction Ohio was the rare exception, having overcome regulatory burdens to legally distribute naloxone in 2019.)

Who made it work

Local community groups have better access to people who use drugs and are at risk of overdose death than do local governments, no matter how well meaning. The last leg of naloxone delivery — getting it to people suffering an overdose — is the hardest part of naloxone delivery.  And the state’s most recent effort, for the first time, partnered more closely with regular people better positioned to reverse overdoses.

Believe it or not…the U.S. Congress deserves credit, too. Nearly all naloxone was purchased with federal State Opioid Response funds. This is an appropriate way to spend this pool of money. Ohio’s opioid response grant is huge ($96.2 million this year alone) for a reason: the federal grant formula sends Ohio extra money because of our horrific overdose death level. By comparison, Michigan only gets $36.4 million. To be blunt, Ohio residents who use drugs died for this money and our state government honors them when we spend money directly to prevent overdose death.

Lastly, a salute to a bureaucratic agency you’ve never heard of: Ohio Pharmacy Services. It is the state’s wholesale pharmacy and delivers a wide range of pharmaceutical drugs across Ohio to health departments, jails, treatment centers, hospitals, etc. It employs about 85 people.

With little warning, the pharmacy was asked to deliver tens of thousands naloxone kits on short notice to dozens of new places (some private homes of harm reduction activists) across Ohio. It was an enormous job for a small, short-handed agency. Somehow, they did it. Now, you don’t get into supply chain work for the romance of it. But the importance of this work is enormous. When it comes to distributing 100,000+ naloxone kits in 45 days during a time of record overdose death, the supply chain can literally be the difference between life and death.