The role of class in overdose death

Is there a connection to support for Donald Trump? 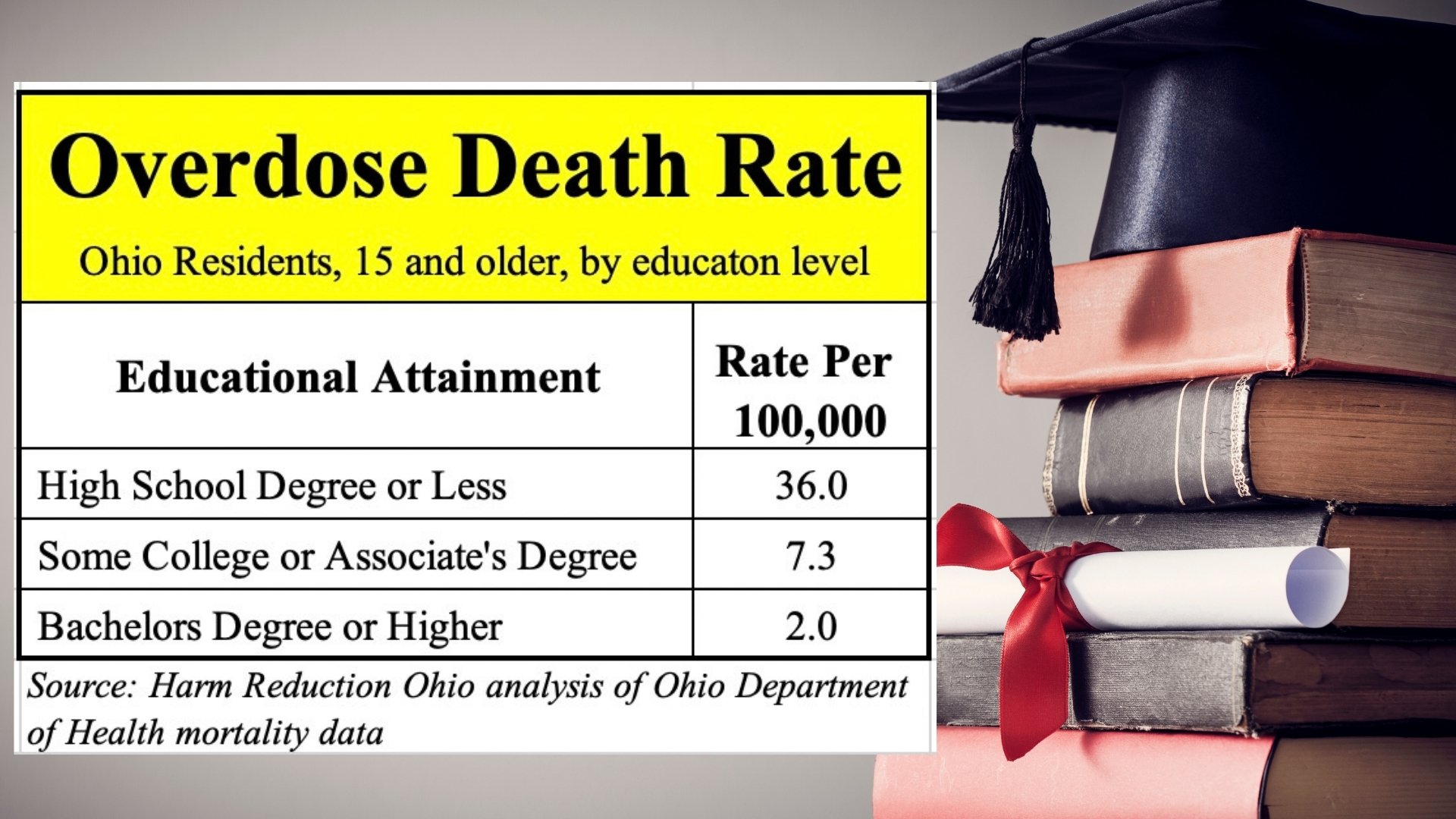 It’s often said that “overdose cuts across class lines.” That’s true but only barely. In fact, overdose death is a form of heartbreak experienced overwhelmingly by people of lower incomes and lower education levels. Affluent people affected by overdose are often excellent spokespeople for ending stigma and implementing harm reduction policies. But we should not lose sight of the fact that, as a group, affluent people have been mostly spared the horror of deaths caused by accidental drug overdoses.
The accompanying chart shows overdose death rates by level of education for Ohio residents age 15 and older in 2019. You’ll see that Ohioans with high school degrees or less suffer overdose death at 18x the rate of residents with college degrees. Overdose death rates also differ among men and women, racial groups and geographic areas. But nothing comes close to the 18x difference in death rates based on education level, which is a good proxy for income levels.
This difference doesn’t mean we shouldn’t care about overdoses among people with college degrees or that their preventable deaths are any less (or more) worthy of moral concern. But it does mean that, when considering the big picture and drug policy generally, we need to keep our focus on the blue collar working class people who have been most devastated by the overdose epidemic.
In Ohio, the highest levels of overdose death from 2015-20 for people with no more than high school degrees or GEDs were in these working class counties:
* No. 1 — Scioto (Portsmouth).
* No. 2 — Fayette (Washington Courthouse).
* No. 3 — Montgomery (Dayton).
* No. 4 — Butler (Middletown).
* No. 5 — Clark (Springfield).
To be blunt and factual (but not political), the level of overdose death overlaps greatly with political support for President Trump. Ohio as a whole supported Trump over Vice President Biden by a margin of eight percentage points in both 2016 and 2020. But Trump’s margin in Scioto County and Fayette County was 42 points and 51 points respectively. Theory: stress on the blue collar working class, especially men, may be driving both these seemingly disparate phenomena.
Interestingly, the highest level of overdose death for people with college degrees was found in two northern Ohio counties: Trumbull (Warren) and Erie (Sandusky). Both counties have suffered decades of population loss and economic difficulties. Both counties voted for President Obama in 2012, then flipped to Trump in 2016 and supported Trump by even larger margins in 2020. Coincidence or not, Trump’s margins and overdose deaths both expanded in the last four years.
To finish on a more subtle note: the greatest gap between college-educated residents with LOW overdose death rates and high-shool-educated residents with HIGH overdose death rates were found in the two fast-growing suburban counties next to Cincinnati: Butler County to the north and Clermont County to the east.
This seems to reflect the huge gulf — both politically and in overdose mortality — between the working class and the educated, professional class that comes suburbanization. Two groups of people live closer to each other geographically, yet their everyday lives that are very different. It’s a gulf that translates into different incomes, values, beliefs and, ultimately, levels of overdose death. It compels the affluent, college-educated, professional class to maintain a high level of moral concern the health of people for whom they may not have a lot in common.