OneOhio opioid settlement board has almost no minority representation 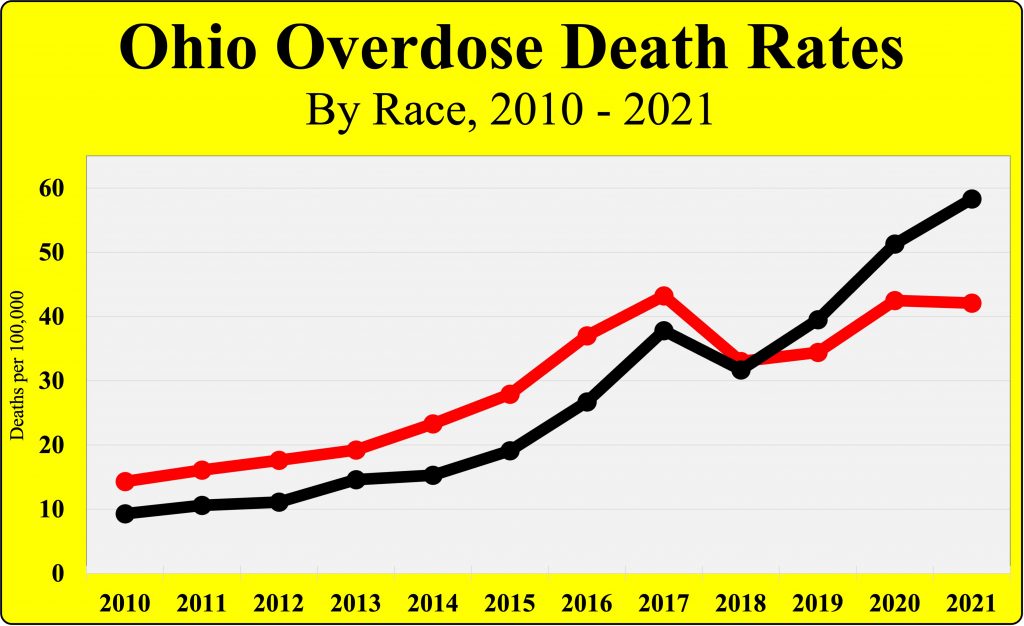 White Ohio residents suffered an overdose death rate of 42.1 deaths per 100,000 residents, according to nearly complete Ohio Department of Health mortality data. That rate is down slightly from 42.5 in 2020 and the previous high of 43.2 in 2017.

When looking at death counts, about 30 fewer White Ohioans died from overdoses in 2021 than a year earlier while about 110 more Black Ohioans died. The combined results were a record year for overdose death in 2021, but significant changes in the demographics of who was dying.

The 2021 mortality data is only 99% complete, so a few more deaths are still to be reported. However, the additional deaths will not affect the trend of an increasingly large racial gap in overdose death rates.

The increasing racial gap in overdose death rates reveals significant problems with the emphasis of Ohio’s overdose prevention efforts and a demographic narrowness in who controls money and policies.

Last week, the OneOhio Recovery Board, which will spend a majority of the state’s opioid settlement money, met for the first time. The public was banned from attending the meeting and told to watch a video. The video showed that ALL 27 people in the room were White. The lone Black member of the 29-member board, a former vice mayor of Cincinnati appointed by the governor, participated by video.

Despite the involvement of many well-intentioned people and spending large sums of money, Ohio’s overdose prevention effort is, at its core and at the macro level, too narrow in:

People with lived and shared real-world experience need to be welcomed to the decision-making level of overdose prevention. Instead, not only can’t we get a seat in the table, we aren’t even allowed in the room!