Racial gap flipped from white to black in 2019

About 800 Black Ohio residents died of drug overdoses, shattering the previous record of 651 deaths in 2019. By contrast, overdose deaths for White residents increased from last year but was still several hundred below the record of 4,188 deaths set in 2017.

We won’t know exact death totals until late summer when Ohio’s mortality data is finalized. What we do know is that the racial dynamic of overdose death has fundamentally shifted in Ohio. In 2017, the age-adjusted overdose death rate for White Ohioans was 11.7 percentage points higher than for Black Ohioans. As the chart shows, the racial gap has flipped entirely since then. In 2020, Black residents will die of overdoses at a rate 7.7 percentage points higher than that for White residents. 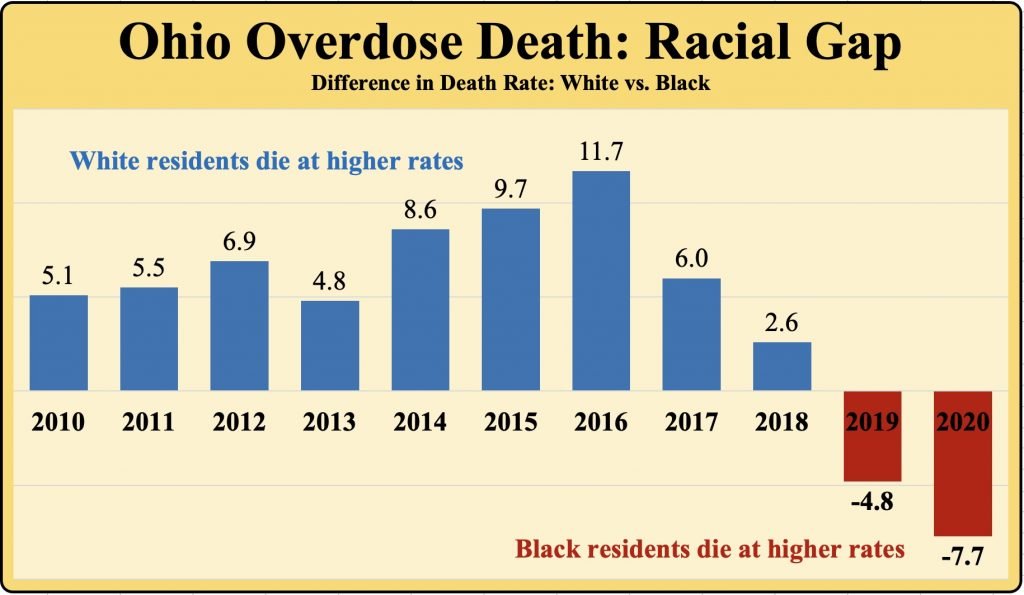 How fentanyl changed everything

The primary driver of this change has been the spread of fentanyl and its analogs into other drugs, especially cocaine. For whatever reason, Whites have always died of heroin and opioid overdoses at higher rates than Blacks. When fentanyl first arrived in Ohio, it was primarily killed opioid users. The result was record-breaking levels of death in 2017, especially among Whites who use heroin and other opioids.

Today, fentanyl is an all-purposes adulterant, found in every prohibited drug except marijuana. In Ohio, people whose drug of choice is primarily cocaine, meth and benzos account for a large share of overdose deaths, probably more than half but government and researchers don’t ask the right questions so we don’t really know for sure.

This has made cocaine and meth — drugs that rarely cause overdose death on their own — extraordinarily dangerous in Ohio. A tiny amount of fentanyl or a fentanyl analog that might not phase or even satisfy a regular opioid user might kill a cocaine or meth user quickly. People who don’t use opioids regularly lack the tolerance for fentanyl doses that opioid users develop. Thus, to an opioid user, 50 micrograms of fentanyl or a fentanyl analog might be a mediocre substitute for heroin. To a cocaine user, it could put them in a coffin, especially if they’ve been drinking alcohol.

What it means for Ohio

The dramatic change in the racial demographics of overdose death means we need to change the way we think about Ohio’s overdose catastrophe. We do not have an opioid crisis or opioid epidemic. We have an overdose crisis and an overdose epidemic. Ohio has taken our state’s drug users — note: we use drugs at rates slightly below the national average — and killed them in large numbers because our misguided policies has caused deadly adulteration throughout the drug supply.

Even today, Ohio’s naloxone distribution effort — a good thing in which Harm Reduction Ohio participates — is aimed primarily at white opioid users. We need to expand who naloxone and other overdose reduction policies are aimed at to accurately reflect the demographics of who is dying, the drugs involved and so on.

Fentanyl test strips are more appropriate for cocaine and meth users than for opioid users who assume, correctly, that early every opioid they use contains fentanyl. By contrast, about 11% of cocaine and 4% of meth is mixed with fentanyl, according to our analysis of drug seizure data. Ohio has made no systematic effort to distribute fentanyl test strips because they are considered drug paraphernalia and technically illegal. Thus, a life-saving campaign aimed at reaching people who most need test strips is forbidden fruit in Ohio. Is it a coincidence that Black drug users pay a steeper price — in imprisonment, in death and more — that others because of Ohio’s drug policies?

The nature of Ohio’s overdose epidemic has changed since prescriptions for Oxycontin were out biggest problem. What we did to address the problem of 1,500 overdose deaths a year has put us on a path that will results in about 5,000 overdose deaths this year. To fix the problem, we must first understand it and then begin incremental changes (some large) to reduce the harms we have inflicted on ourselves in Ohio.