Drug policy — not drug use —  is the cause of our overdose epidemic.

Emphasis on drug checking and safe use needed. 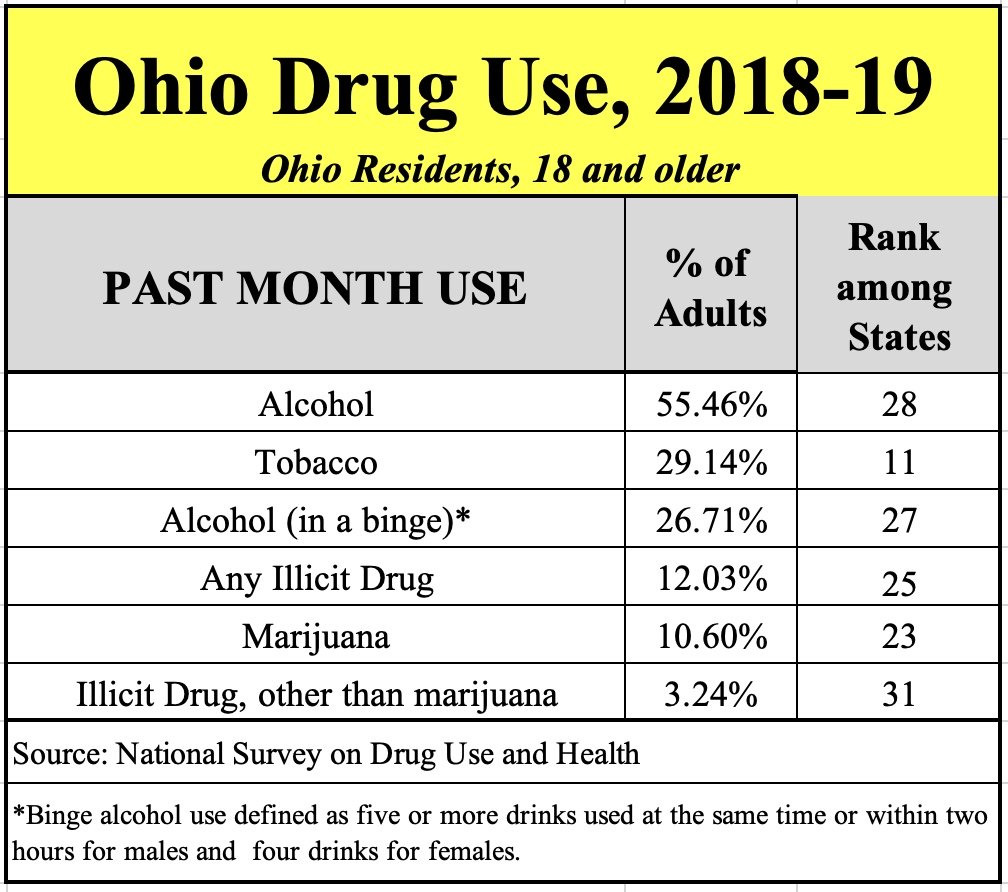 The federal government has released the latest drug use estimates for each state. The report confirms again what has been true for decades: Ohio does not have unusually high levels of drug use.

The most important number is use of illegal drugs, except marijuana. This captures all drugs causing fatal overdoses in Ohio. For example, in 2020, about 1,000 Ohio residents will die of meth-related overdoses, about 80% of those also involving fentanyl. By contrast, marijuana carries no risk of fentanyl; although “fentanyl-laced marijuana” is often claimed, no cases have ever been confirmed.

The National Survey on Drug Use and Health, which surveyed about 10,000 Ohio residents on their drug use in 2018-19, reports that 3.24% of people 18 and over used any illegal drug other than marijuana in the past month. That ranks No. 31 among the states. (Colorado is the highest ranked state, Wyoming the lowest.)

Ohio’s rank varies  by drug. Our highest ranked for 2018-19 was No. 15 for heroin use. That may be a cause for concern, but it does not explain why we rank No. 2  in our overdose death rate.

In short, high levels of drug use in Ohio have not caused our state’s aberrantly high overdose death rate.  What has caused out horrifically high overdose fatality rate is an aberrantly adulterated drug supply — worse than that in any other state in the country. (See research elsewhere on this web site.)

Ten years ago, Ohio’s overdose death rate was about the national average. In other words, about what you’d expect in a state with average drug use. Overdose death soared as Ohio cracked down on prescription opioids, pushing people into the illegal market for (adulterated opioids).  This triggered a dramatic change in the illegal drug market, bringing cheap, easy-to-make, easy-to-smuggle fentanyl into the heroin market first and later to all drugs (except marijuana).

What can be done to bring our overdose death back to average? If Ohio had average levels of drug overdose death, we would have suffered about 2,500 overdose deaths in 2020 rather than nearly 5,000.

Ohio has made solid efforts to expand naloxone access and substance abuse treatment, especially medication assisted treatment for those with opioid problems. However, these worthy efforts focus on reducing drug use problems experienced by people who struggle with drugs. They do not address our state’s aberration in overdose death caused by aberrant adulteration.

To reduce drug death — i.e., cut death in health and restore it to normal levels — requires a significant effort to expand drug checking and safer use (such as safe consumption sites). Ohio has essentially done nothing to reduce our worst-in-the-nation adulteration problem, which is the dominant factor driving overdose death.

Let’s make this year a time to be honest with ourselves, to follow the evidence, to understand that overdose death is preventable only if we address the true cause. The current approach, while well-meaning, essentially blames drug users for their own deaths. “We’ll help you not die if you stop using” is the essence of a treatment-only response to overdose death.

Naloxone distribution is a step in the right direction. (Harm Reduction Ohio is Ohio’s largest distributor of naloxone, an effort made possible by the generous support from the Ohio Department of Health.) However, naloxone only prevents an opioid overdose from being fatal when used in time. It reverses an overdose; it does not prevent them.

Drug checking — letting people know what is in their drugs and how much is in their drugs before the drug is used — empowers people to prevent overdose. Knowledge is power. Safe use practices help, too. Today, it is illegal in Ohio to test drugs with fentanyl test strips. Did you know that? Probably not. Local government health departments give them out by the thousands. And HRO doesn’t know of any cases of a fentanyl test strip prosecution occurring. (If you do, let us know. we would love to test a case in court!)

But this shows how Ohio laws, regulations and practices need to be changed, to brought into concert with what is causing overdose death and what can be done to reduce it.  Let’s hope 2021 is a good year.

The two charts below show past month and past year use for drugs reported by the federal government’s survey. 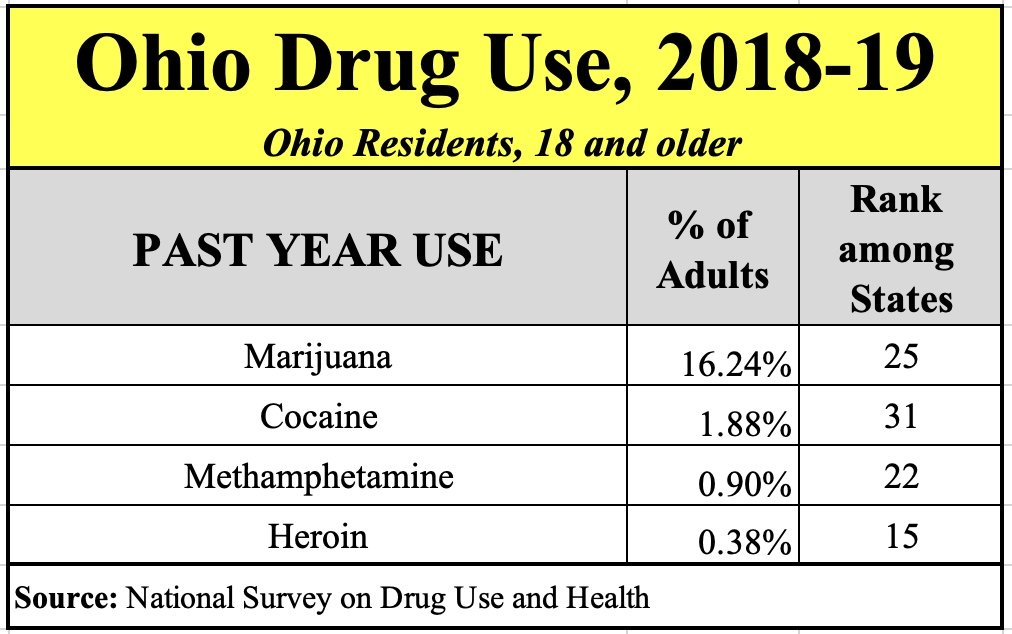