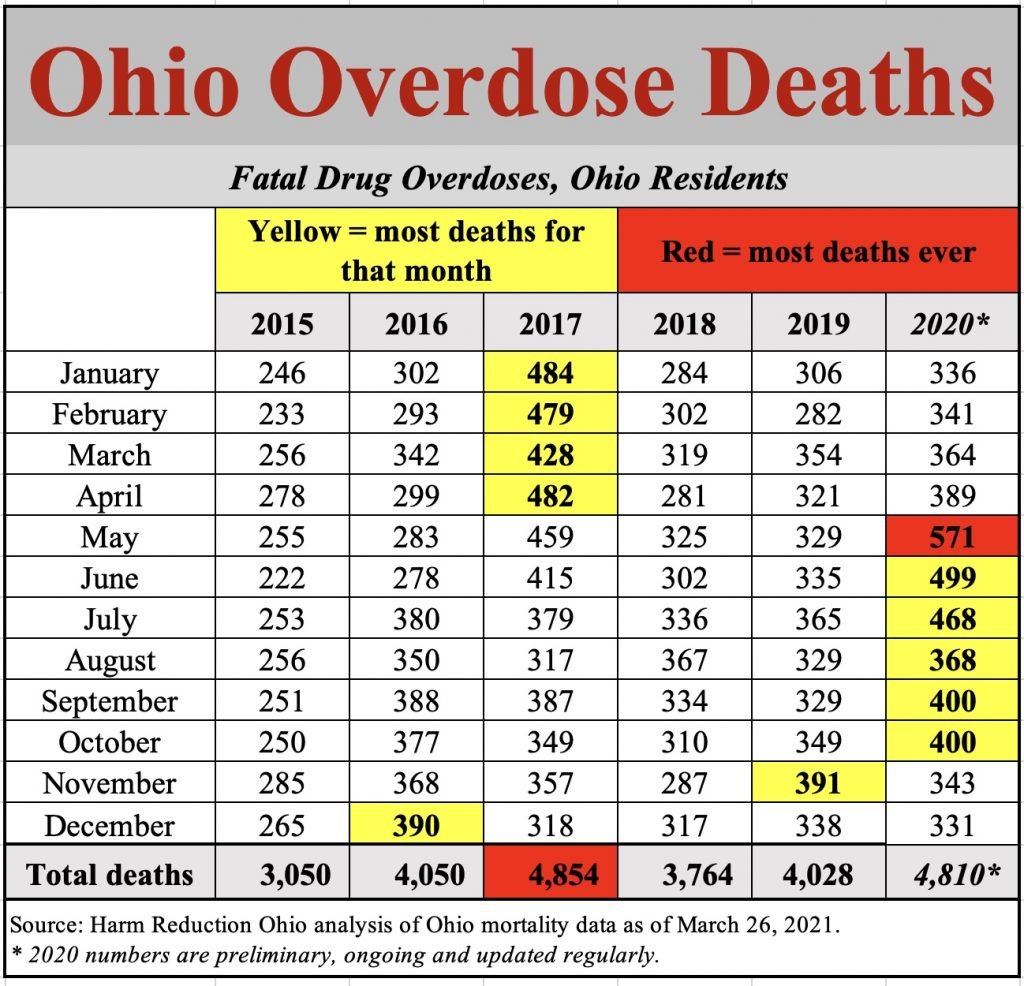 The latest update in the Ohio Department of Health mortality data shows that 2020 had the the deadliest September and October for overdose deaths in Ohio history, surpassing the previous record for overdose deaths set in 2017.
Some deaths are still being documented and added so the number of deaths will increase slightly. It’s too early to know if November and December will set records for overdose deaths.
Overdose deaths have receded slightly since the historic peak was set in May of 2020. That was the deadliest month ever in Ohio history. However, death rates continue to be aberrantly high, even by Ohio’s horrific standards.
Worth noting: In Ohio, the nature of overdose death has changed dramatically in the last two or three years. A large share of deaths — about half — are related to the user of cocaine and meth adulterated with fentanyl or a fentanyl analog. Ohio’s response to overdose is still designed as if this epidemic of death is all about people who use opioids, especially prescription opioids. This is an outdated approach needs to be changed dramatically and fast.
The idea that high levels of opioid use is the problem has never really been true and certainly is not today. The problem is — and always has been — Ohio has the nation’s most fentanyl-contaminated drug supply. The spread of fentanyl into non-opioids (cocaine, meth and fake pills) has driven increased overdose death since 2017. (Note: Marijuana is safe; fentanyl-laced marijuana is a myth.)
Cocaine and meth can be problematic for people who use drugs, but these drugs seldom caused overdose death — until fentanyl moved into the cocaine and meth supply. Now, large numbers of cocaine users — disproportionately Black Ohioans — are dying from fentanyl overdoses. The same is true for meth use, who skew white and non-urban.
Today, Black residents have the highest overdose death rates in Ohio. Yet our state’s response does not reflect that the demographics and drug preferences connected to overdose death have changed. Ohio’s overdose response is an example of health inequities that plague overdose prevention policy and execution.
In short, Ohio needs to acknowledge that we have overdose epidemic, not an opioid epidemic. We need to stop inaccurately blaming people who use opioids for causing their accidental deaths and the deaths of thousands who use other drugs.
Today, state and local health departments are understandably consumed by COVID-19. It’s not easy to change a misguided drug policy in the middle of an unrelated infectious disease crisis. But we, as a state, need to start being honest with ourselves. The nature of overdose epidemic changed before  coronavirus arrived and we did little to adapt then. The gap between what we pretend our problem is (i.e., high levels of opioid use) and what our real problem is (i.e., drug supply adulteration) has grown from chasm to canyon.
Ohio’s effort to reduce overdose death is failing because it is addressing our level of drug use (average) as the cause of aberrantly high overdose death (No. 2 in the country). The mass deaths of Ohioans who use cocaine and meth must become a prevention priority, not an afterthought, and reducing adulteration of the drug supply must be our primary focus.
Read this article to understand drug use levels in Ohio