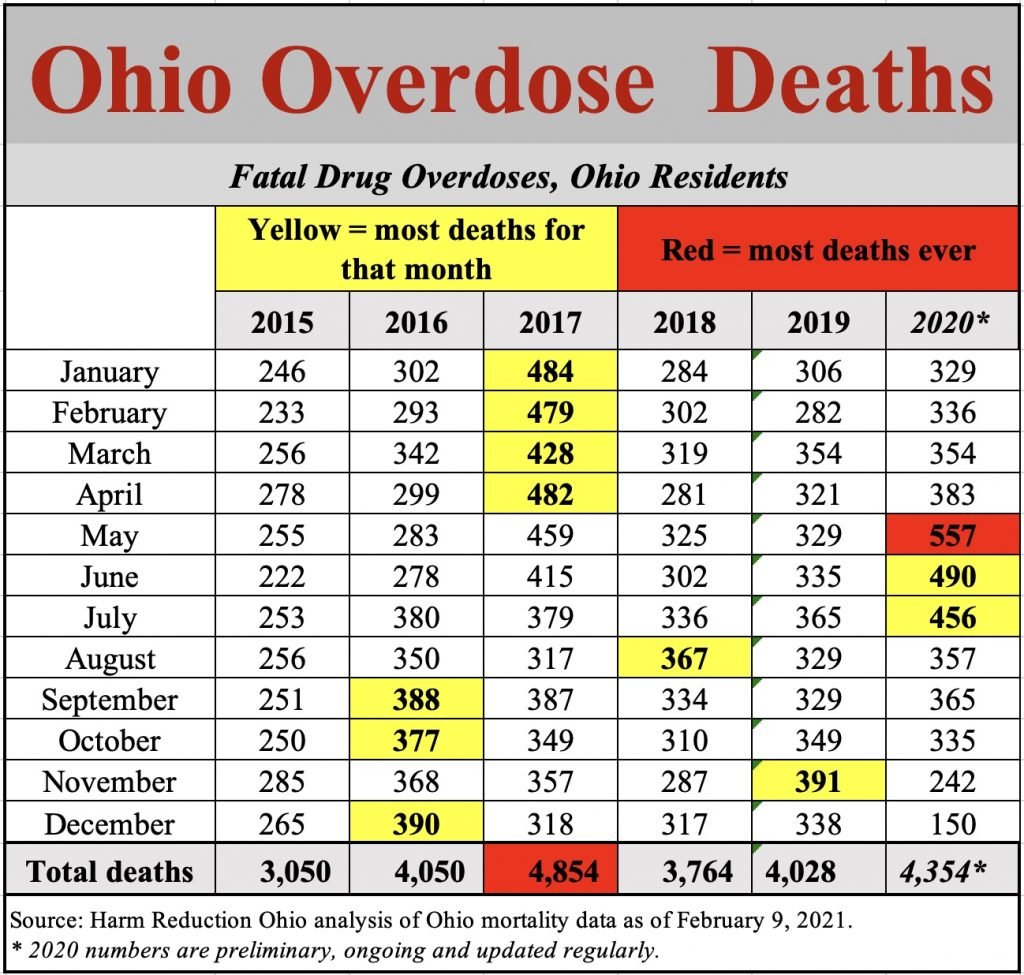 Overdose deaths appear to have fallen from the record-shattering and heart-breaking levels that occurred this spring and summer in the early days of COVID-19.

Overdose death data is not complete enough to say for sure, but, based on the pace of reporting so far in the Ohio Department of Health mortality database, it appears overdose deaths fell below 400 per month starting in August.

That pace of overdose death is still horrific. It will likely keep Ohio ranked No. 2 in the nation for our overdose death rate. But it is below the unprecedented level of overdose fatalities that occurred in Ohio in May, June and July.

During the early days of COVID-19, May of 2020 became the deadliest month in Ohio history: 557 confirmed overdose deaths with a few more likely to be reported. This was the first time Ohio had more than 500 deaths in one month. June and July  had overdose death tolls above 400. Those were the highest death counts ever for those months.

Then, for reasons that aren’t clear, overdose deaths appear to have fallen slightly in the second half of 2020. Overdose fatalities in August of 2020 will likely be below 400 when the final count is completed later this year. When reporting is complete, August of 2020 may be the deadliest August ever, albeit with a decline in death from the previous months.

The Ohio Department of Health mortality data currently show 4,354 confirmed overdose deaths in 2020. The will number will rise as more deaths are confirmed and causes of death classified. Overdose death reports are still flowing in, especially for the last four months of the year, because investigations, autopsies and toxicology reports take time to complete. .

The final drug overdose death count for 2020 will be about the same as the record of 4,854 deaths set in 2017. The death surge of July 2016 through June 2017 was caused by a large flow of carfentanil into Ohio’s illegal drug supply. (See other stories on this web site for details.) The 2020 death surge appears to be the result of an increasing share of fentanyl and fentanyl analogs (but not carfentanil) into the drug supply, plus a likely increase in relapses due to the stress of fentanyl.

The increase of fentanyl in Ohio’s drug supply — it was already high but went even higher — may have been caused by supply chain shifts caused by COVID-19 and its economic disruptions. Harm Reduction Ohio will report a clearer picture of what drove overdose death in 2020 when it gets updated drug seizure data later this month.

What do overdose death totals tell us about drug policy and public health?

Based on Ohio’s drug use levels and “typical” adulteration in the drug supply caused by drug prohibition, it would be expected for Ohio to have about 100 to 200 fatal drug overdoses per month. Ohio can never go below that level while the drug war is active because drug prohibition creates an adulterated drug supply that kills. This level of death is “normal” and unavoidable during a drug war at the current level. Drug prohibition kills. Always has. Always will. Is doing so right now.

However, overdose death levels above 200 per month in Ohio can be increased or decreased based on policy choices and actions pursued during the drug war. Drug checking, naloxone distribution, reducing criminal penalties on drug offenses, legalizing marijuana, ending drug-induced homicide prosecutions, expanding medication-assisted treatment and adding syringe programs are all ways to reduce overdose death.

If you’re familiar with Ohio drug policies, you’ll notice Ohio is vigorously pursuing both kinds of policies: policies that kill more people and policies that reduce death. The monthly death counts shown in this chart are essentially the net difference between how these conflicting policies are playing out.

Ohio’s most immediate problem is that we have the nation’s most fentanyl-heavy drug supply, worse than any state in the country.  More than 90% of changes in overdose death in Ohio can be explained by changes in the chemical composition of Ohio’s illegal drug supply, a phenomenon documented with the help of Harm Reduction Ohio research that has examined tens of thousands of crime lab tests completed on seized drug samples and compared this data to fluctuations in overdose deaths.

(I was co-author of an article in the online version of the Journal of the American Medical Association documenting this. In addition, this article in Drug and Alcohol Dependence, another scientific journal, uses the same Ohio data for an even more detailed analysis. Another academic journal article will come out soon showing that 93% of changes in overdose death in Ohio can be explained by changes by what’s in our state’s drug supply. That’s why escalating the drug war — drug-induced homicide prosecutions, for example — backfires and causes a more adulterated drug supply and more overdose deaths.) 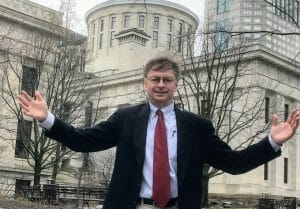 Dennis Cauchon, president of Harm Reduction Ohio, is a former national reporter at USA Today and author of this article.

Just as we cannot eliminate all traffic fatalities, we cannot eliminate al fatal drug overdoses. But we can reduce them (or increase them, as we’re unfortunately doing now). As a practical matter, we can measure our overall policy success by monitoring the level of fatalities in Ohio. This is best done by comparing to what’s occurred in our past and what’s occurring contemporaneously  in other states.

Realistically, Ohio could reduce overdose deaths below 300 per month even without significantly changing today’s political context. To bring overdose deaths into the two hundreds — as it was consistently as recently as 2015 — is a realistic goal. Overdose deaths running in the three hundreds per month reflect poor performance based on what we can and know we should do. When deaths exceed 400 a month — or 500 per month! — we should consider that a five-alarm fire and gross failure of policy and execution.

Our current failure doesn’t mean we should start criticizing and fighting with each. It does mean we need to judge drug policy and public health policy honestly and based on results, not intentions. We need be honest about our mistakes and failures. When you’ve dug as many graves as Ohio has in the last decade through well-intended policies with catastrophic results, the first thing to do is stop digging.

Every drug overdose shatters many lives, including, of course, the one it takes. We have to take care of people one at a time. But we also need to try to identify and control the the tides of overdose death. When overdose deaths rise from the low one hundreds every month (in 2010) to more than 300, 400 or 500 per month today, we can’t think that this is a problem of individuals. We can’t “blame the user” and pretend more or better treatment is the path to large scale reductions in overdose death.

The country — and Ohio, specifically — has opened the faucets of overdose death and tried to plug it with treatment and naloxone. Many still blame overprescribing of Oxycontin and other opioids for what’s happening now, but, even if that started the overdose epidemic, the days of easy opioid prescriptions are long over and overdose death in those postlapsarian days was just a fraction of what is happening today.

Ohio needs to commit itself to reducing overdose deaths as much as possible and as quickly as possible. Ohio has average drug use levels and, as recently as 2010, had average drug overdose levels. What we’ve done since then has been a catastrophic failure. If we returned to average levels of overdose death reflecting our average levels of drug consumption, our overdose count would fall to about 200 deaths per month. Striving for mediocrity in overdose-increasing policies and excellence in overdose-reducing policies is a goal worth embracing. It’s sad to think that 200 preventable deaths every month, rather than zero, is all we can reasonably hope to achieve until other states and countries pave the way with drug reform policies. But cutting the risk of overdose death in half is a glass half full that Ohio should embrace. 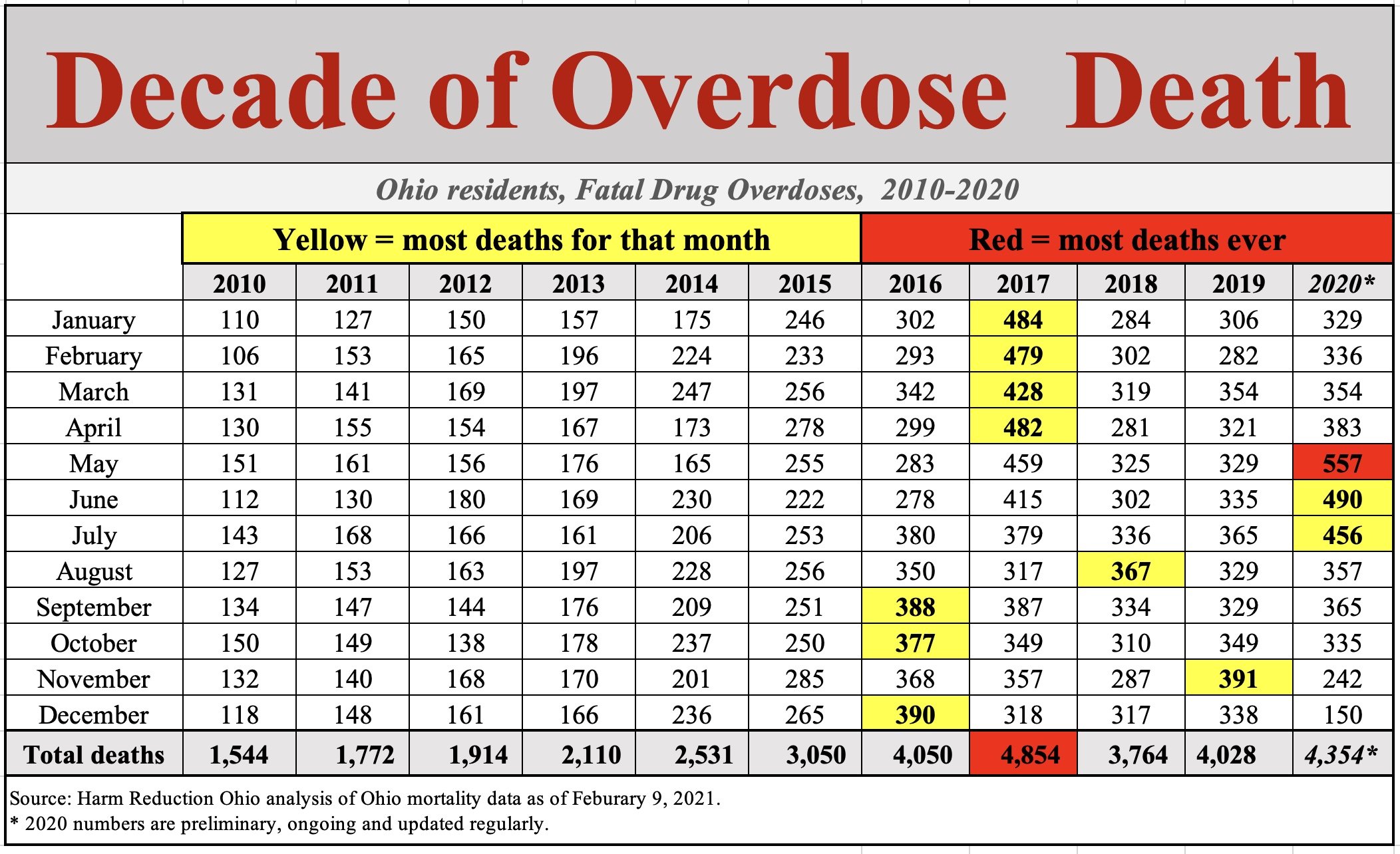