Did you know Ohio ranks No. 36 in drug use but No. 2 in overdose death?

Drug use levels are not causing Ohio’s overdose death catastrophe.

What is the cause? What can we do?

The most enduring myth of Ohio’s overdose tragedy is the false belief that high drug use levels caused our state’s horrific overdose death rate. This is not true. Drug use is not rampant in Ohio.

In fact, Ohioans use drugs at average rates and, by most measures, somewhat below average. The idea that Ohio would have aberrantly high drug use levels is a natural suspicion for a state that has aberrantly high overdose death. But when examined, the idea turns out to be mistaken.

Yet, here we are more than a decade into the overdose epidemic, and the false “drug use problem” theory continues to be the unchallenged foundation of Ohio’s response to overdose death. Adherence to this false theory helps explain why Ohio hasn’t been able to reduce overdose death, despite spending billions of dollars to do so, and why 2020 is likely to be deadliest year ever. The inaccurate “drug use problem” theory — translation: “blame the users”  — diverted attention and resources away from the primary cause of Ohio’s overdose death tragedy: an aberrantly dangerous drug supply.

To end the overdose death epidemic, it is crucial to know and base our actions on this fact:

Ohio does not have unusually high levels of drug use. This article and this chart will explain that. 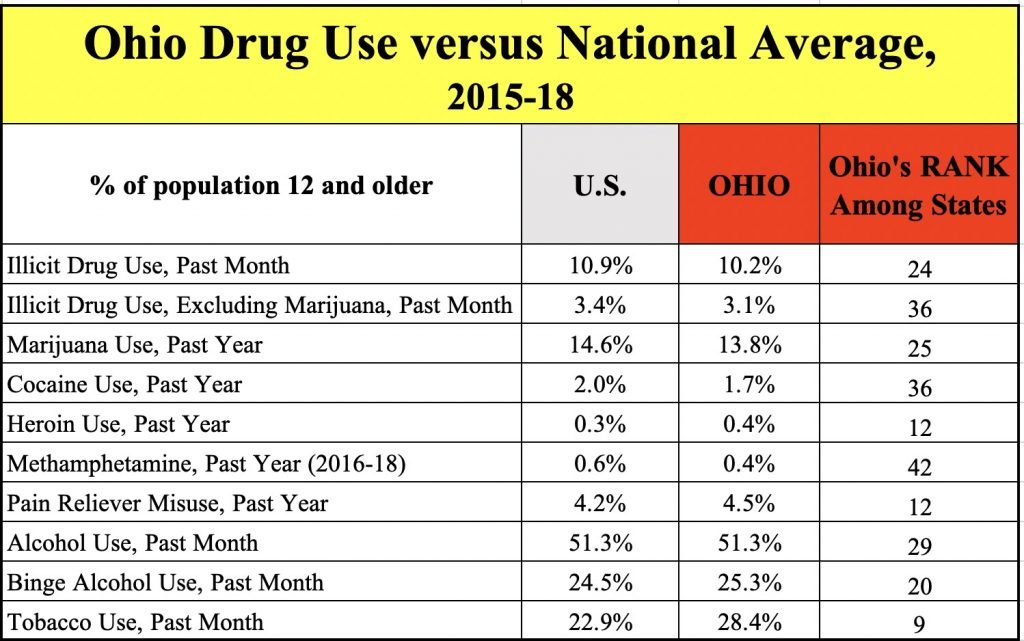 But…we do have horrifically high levels of overdose death. This chart, covering the same years as the drug use chart, shows that.

If Ohio ranked No. 25 or No. 36 in miles driven per capita but No. 2 in traffic deaths, we wouldn’t blame our high traffic fatality rate on Ohioans driving too much. We’d look for another cause — are the cars we drive or the roads we drive on unusually dangerous?

We should apply the same objective, common sensical reasoning to drug overdose deaths. When use is average but death is high, use is not the cause of the death problem. This article will explain the actual cause of Ohio No. 2 ranking in overdose death: an aberrantly dangerous drug supply. A sophisticated statistical analysis (not detailed here) finds that the contents of Ohio’s drug supply explains about 80-90% of increased overdose death.

The purpose of this article is to convince you to stop thinking that reducing drug use can reduce overdose death in a a significant way.

Stop thinking drug use is rampant in Ohio

The numbers in this chart are from the federal government’s National Survey on Drug Use and Health. This survey has been around, in one form or another, since the 1970s and is the only source of national and state-level drug use estimates. Whatever imperfections the survey may have — and surveys on illicit drug use are hard to do and come with imperfections — the design challenges would not be specific to Ohio.

Indeed, a good sign that the survey gets it about right for Ohio is that our state has been found to have fairly average levels of drug use for a very long time. Thus survey design changes, question variation, and a huge sample size that accumulates over many years of survey-taking all point in the same direction: Ohio has average drug use levels when compared to other states and the nation as a whole. This should be no surprise for a state that pretty average in almost every respect — income, demographics and other measures.

Understanding drug use in Ohio

For this analysis, Harm Reduction Ohio combined the most recent years available — from 2015-2018 — for the drug survey to get an exceptionally large and reliable data set that covers the heart of the overdose death epidemic. Tens of thousands of Ohio residents (and hundreds of thousands of people in other states) were interviewed for the surveys.

What did the researchers find?

Ohio is below the national average in overall drug use, as well as use of marijuana, cocaine and meth. Indeed, we rank 36th among the states in cocaine use and 42nd in meth use. This may surprise you, but, guess what? People use drugs elsewhere, too.

People in New Mexico and Nevada use meth at more than twice the rate of Ohio residents (and have relatively low overdose death rates for all drugs and meth specifically).

The top states for marijuana? Oregon and Colorado. No surprise there! Ohio ranks 25th in marijuana use.

Ohio residents are a little above average in using heroin, pain relievers, alcohol and tobacco. We rank No. 12 in both heroin use and the unauthorized use on pain pills. But ranking No. 12 in heroin use doesn’t explain why we rank No. 2 in overdose death, especially since so many deaths here involve fentanyl-laced cocaine and fentanyl-laced meth. Looked at another way, Ohioans use heroin about one-third more than the national average but die of drug overdoses at more than double the rate of residents in other states. 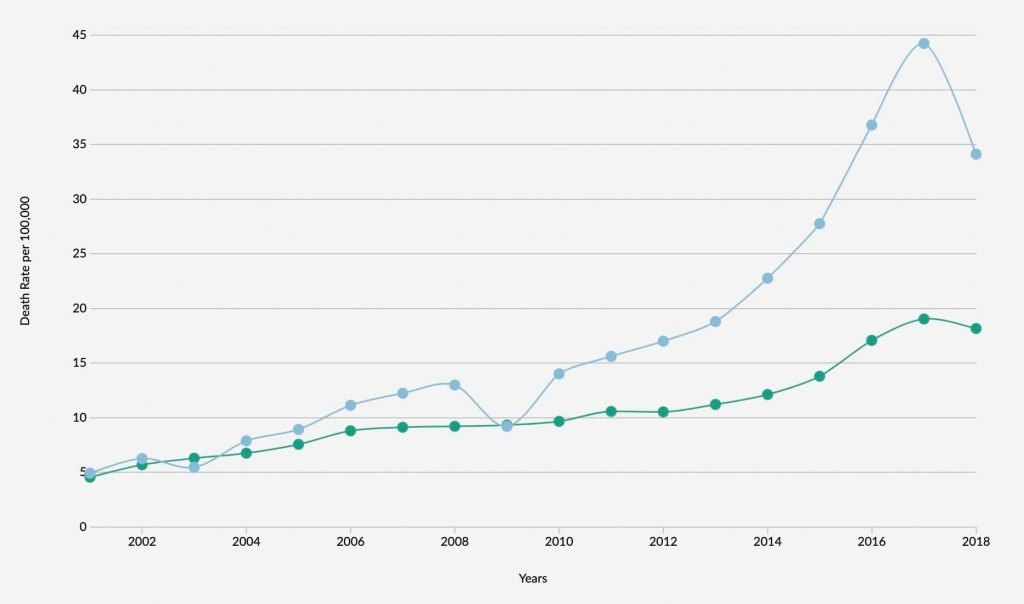 This chart, from the Centers for Disease Control and Prevention, shows how Ohio overdose death rates were average a decade ago, what you’d expect in a state with average drug use. Soaring overdose deaths began in 2010 and coincided with the state’s early and dramatic crackdown on access to prescription opioids, increasing demand for illegal opioids.

One reason Ohio has failed to control our overdose epidemic is we’ve mistaken the cause of the problem. We’ve erroneously attributed our horrific overdose death rate to high levels of drug use. Blaming people who use drugs for dying too frequently is easy to do. But it’s wrong.

The cause of Ohio’s overdose death epidemic is our state has an insanely dangerous drug supply. At the policy level, the variable we need to focus on is making the drug supply safer. I’ll repeat for emphasis: The best way — indeed, the only way — to significantly reduce overdose death is to focus on safe supply.

We need more drug checking, safe consumption sites and timely reporting of what’s in the drug supply. We need more heroin and less fentanyl. We need more fentanyl and less carfentanil. We need to push the drug supply incrementally toward drugs that are relatively less dangerous than what’s currently being used because drug use will always be with us at some level (such as average) but overdose death at extreme levels should not.

What about problematic drug use?

Helping individuals manage their drug use and lives better is an important and worthy goal. This is especially true at an individual and interpersonal level. But it will not reduce overdose death in a meaningful way.

Drug use levels follow broad cultural and social trends. When use of marijuana or heroin or cocaine goes up nationwide, it’ goes up in Ohio, too. And vice versa. At a policy and public health level, states have little influence on changes in drug use levels. If we ranked in the Top 5 of states in drug use, it might make sense to focus on drug use levels. But what is our real goal? To push Ohio drug use levels from No.. 25 to No. 27 (with no effect on overdose death)?

Drug use levels rise and fall like ocean tides and, if reducing death is your goal, trying to prevent these tides is as effective as building sandcastles on the beach. It is better to understand the tides and adjust in ways that make sense. It is wasteful, foolish and futile to pretend that “we shall stop these evil tides!” can reduce overdose death.

But Ohio does have influence on the danger level of our the drug supply. Ohio’s drug supply is probably more dangerous than any other states and certainly in the top three of states. This chart tells the story. 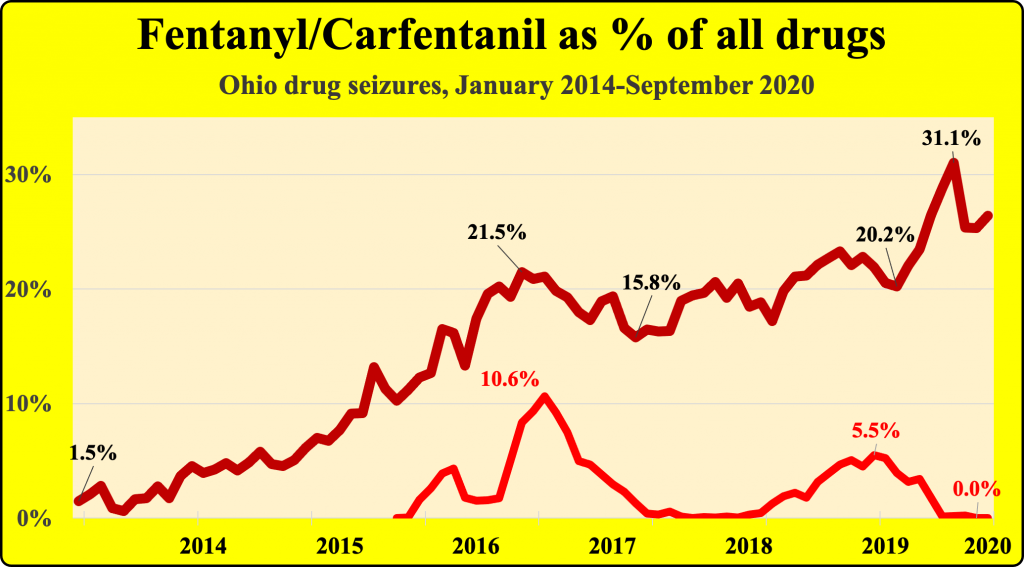 (See elsewhere on this web site for many reports on our highly contaminated drug supply. For example, here and here. Also, see the charts posted at the end of this article.)

Ohio policies that need to change

In Ohio, drug checking is illegal. Even using fentanyl test strips is technically illegal, although everyone does it and local health departments across Ohio hand out the test strips in an effort to reduce overdose death.

But other than ignoring the foolish and deadly restriction on fentanyl test strips, Ohio does almost nothing to reduce the danger of our state’s illegal drug supply and it does absolutely nothing to reduce actual adulteration (danger) levels. By contrast, Ohio has done a decent job of distributing the opioid overdose-reversing drug naloxone (Narcan).

Harm Reduction Ohio supports naloxone distribution wholeheartedly. Indeed, we are the state’s No.1 naloxone distributor, furnishing more than 15,000 kits in the last year alone. But Narcan reverses overdoses; it doesn’t prevent them. To reduce overdose death, we must make overdoses less likely to occur in addition to making them less deadly when they do happen.

The cause of Ohio’s dangerous drug supply

Why does Ohio have the nation’s most dangerous drug supply?

Why do we have higher levels of fentanyl and dangerous carfentanil than every other state?

Why has fentanyl and its analogs spread more quickly and thoroughly into the cocaine and meth supply than in other states?

We don’t know why for sure. The most likely reason is that former Gov. John Kasich cracked down early and hard on prescription opioid use. He thought this would reduce opioid use. In fact, drug markets don’t go away, they adjust.

The crackdown forced people who used opioid to seek alternative sources of supply, and it resulted in suppliers finding cheaper, more accessible, easier-to-hide alternatives. Drug markets turned to the internet and China for cheap, small, easy-to-hide fentanyl and the 600+ fentanyl analogs.

This well-intentioned policy had disastrous consequences. It made Ohio an innovator fentanyl. Other states have followed Ohio is limiting the supply of unadulterated prescription opiates. It’s an interesting question to consider: what would have happened in Ohio did not act so early and decisively? Would we have been a follower rather than an innovator?

Conventional wisdom is that evil drug suppliers from elsewhere add fentanyl and its analogs to Ohio’s drug supply. That is also a myth. Heroin, cocaine and meth come into Ohio largely pure. The adulteration occurs in Ohio, by Ohioans, as the drugs move down the supply chain to the consumer level. (See this story for an explanation.)

Today, untangling the complex cause of the epidemic’s history is less important than focusing on what can be done now to reduce overdose death. The No. 1 thing to do is stop blaming drug users and drug use. We need to accept that the cause of the overdose epidemic is a bizarrely dangerous illegal drug supply.

Drug prohibition always creates a more dangerous adulterated drug supply. This is not a side effect of drug prohibition; it is the primary and unavoidable effect. When you make bulky, relative safe drugs harder to provide or obtain, the market shifts to smaller, more potent, more dangerous drugs. Opium becomes morphine, morphine becomes heroin, heroin become fentanyl and so on. (This is called the Iron Law of Prohibition, as some readers and economists will now.)

Ohio happens to have the most dangerous drug supply in the country. We’ve turned average drug use into a horrifically deadly phenomenon. In 1999, we had average drug use and ranked 36th in our overdose death rate.

In the last 20 years, Ohio has made terrible policy decisions that sounded good at the time and were largely well-intentioned. But we know now that the results were disastrous — the opposite of what was intended.

Ohio created its tragic ascension from ranking No. 36 in overdose death to ranking No. 2. We can fix this self-created problem, too. First, we must accept that policy mistakes created our state’s aberrantly dangerous drug supply and that focusing on a safer illegal drug supply — not on drug use — is the only path to reducing overdose death. 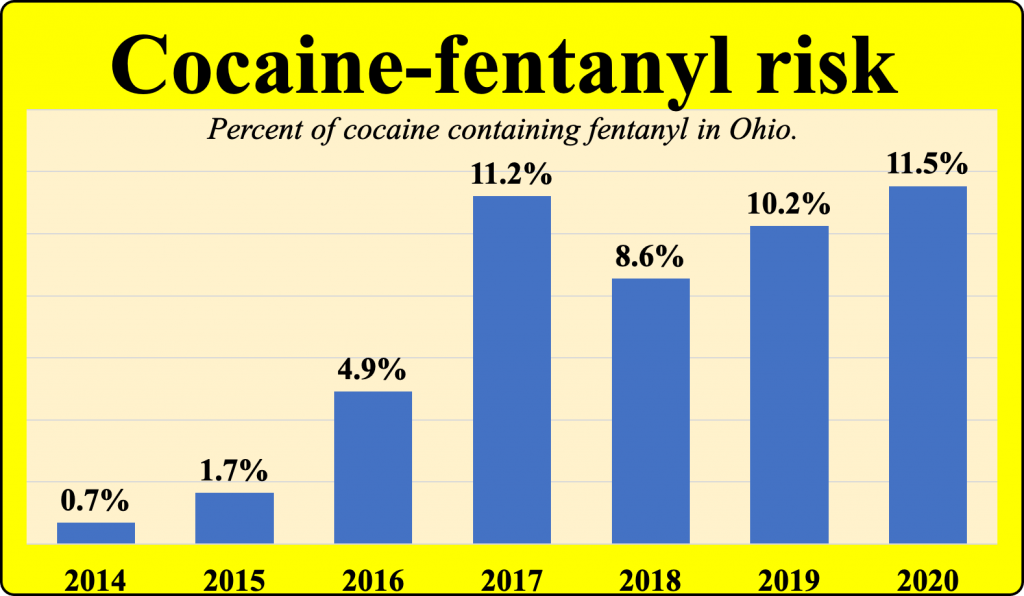 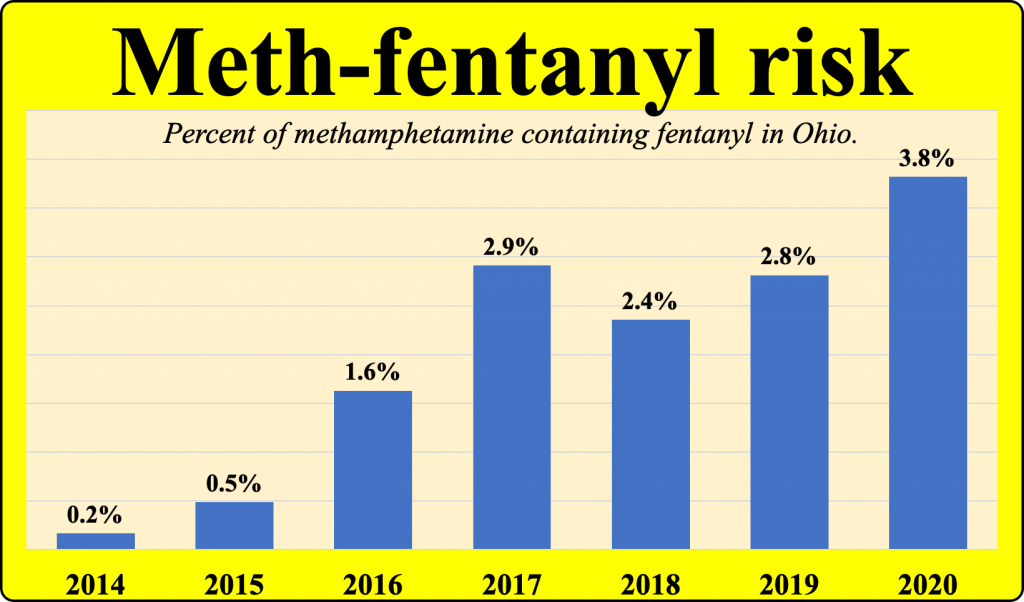